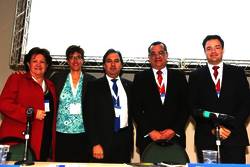 The focus of the Intersolar South America in Sao Paulo in August 2017: photovoltaics. This only made it even more crucial for the newly founded Brazilian solar thermal industry association Abrasol to fly the flag. The opening speech on the Strategic Importance of Solar Thermal in Brazil, the title of the solar heat conference day on 23 August, came from Eduardo Azevedo (third from left), State Secretary of Energy Planning and Development at the Brazilian Ministry of Mines and Energy, MME.