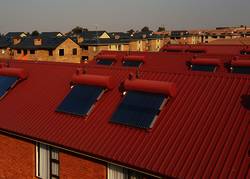 In 2018, solar water heater suppliers headquartered in Europe were more satisfied with sales than those not located on the continent. In all, 78 % of the former saw a strong or slight increase in sales volume last year compared to 2017. Elsewhere, the same was true for only 51 % of all businesses. Thriving export markets were Spain and Italy. These are some of the findings of the most recent solrico survey carried out in November and December 2018 (Photo: Maxlite, South Africa).

Seventy-eight companies, more than half of which were not based in the EU, responded to solrico’s questionnaire. The results of the industry survey were presented in news articles on solarthermalworld.org published at the beginning of February 2019:

Southern Europe: A good place for SWH companies to do business

Exciting prospects in Kenya, Morocco and the UAE

Find the list of all companies that responded to the survey here.