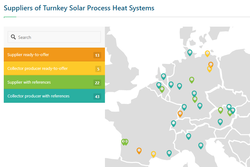 In 2018, suppliers of industrial solar heat technology commissioned 104 systems with a combined collector area of at least 57,283 m² (40 MWth). The number of systems was nearly identical to that a year earlier, when 107 installations came online. These are some of the findings from surveying turnkey solutions providers listed on the SHIP Supplier World Map, which was created by the international project Solar Payback. Solrico carried out this survey among around 80 turnkey technology suppliers in February and March 2019.

The SHIP Supplier World Map lists all companies with the number of SHIP reference projects they realised by the end of 2018. The world map also includes ready-to-offer suppliers that have not realized a SHIP reference system yet, but have experiences with large-scale solar thermal systems for public and private customers.

Based on the number of systems, the leading SHIP markets in 2018 were Mexico (51), China (15), India (10) and Germany (9). But industrial solar heat systems were also installed in Argentina, Austria, Cyprus, France, Greece, Israel, Italy, South Korea, South Africa, Spain, Turkey, the UAE and the USA.

You find a comprehensive assessment of this global SHIP Supplier survey on solarthermalworld.org.

Regardless of their location, 93 % of those offering SHIP systems said, in a repeat of the situation in 2017, that they were not satisfied with business growth. Of the 82 participating companies only 32 installed one SHIP system or more last year. The reasons for the small success rate were low fossil fuel prices, limited awareness and a customer preference for short payback periods.